Skip to content
Hello,
we have this problem with this machine for long time now, I’ve tried getting help from official supplier multiple times, no luck, they just don’t have expertise to understand what the problem with machine is and how to fix it.

We also have HAAS and Fanuc machines here and we use same solidcam programs for all of them, but with different postprocessors of course, but the G-code looks similar or the same, but machine behaviour on Hurco is really different.
I cant find in machine parameters or settings an option which would lead to solution to this.

When the tool exits contour (with compensation active) it creates crazy move (arc move) returning to part and damaging it. So mill follows contour fine until lead out and decompensation point, then mill goes in arc move and returns to part damaging it, although there is lead out in solidcam to tangent line, no matter how long it is, it still won’t follow it, it will crash into part. So I have to manually draw prolongation of that final contour line to lead mill well outside of milling contour so that final decompensation move wouldn’t damage parts.

In g-code there is nothing which would "tell" machine to create such a crazy move, but still it does that.

Here is the example of what it should look like. The tool T2 is 12mm flat end mill (in solidcam I made it to be 12.2mm to add for offset compensation for operators if needed, so tool radius entered in tool table could be max 6.1mm). 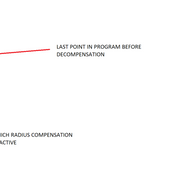 here is the example of this G code which makes same thing as all other programs do on this machine, returns to part in arc move after lead out (when it needs to decompensate):

Here below is shown what the mill path should look like and how it looks on every other machine except Hurco, where it looks like on second picture. 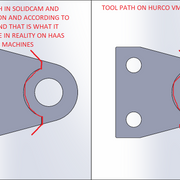